About the Paso Fino 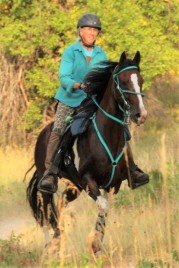 The Ultimate Show and Pleasure Horse

The Paso Fino horse reflects its Spanish heritage through its proud carriage, grace and elegance. Modern care and selective breeding have enhanced its beauty, refinement and well-proportioned conformation that conveys strength and power without extreme muscling. With its lively but controlled spirit, natural gait and presence, and responsive attitude, the Paso Fino is indeed, a rare and desirable equine partner.

The History of the Paso Fino

The Paso Fino's journey to the Americas began more than 500 years ago with the importation of Andalusians, Spanish Barbs from North Africa, and smooth-gaited Spanish Jennets (now extinct as a breed) to the "New World" by Spanish Conquistadors. Bred for their stamina, smooth gait and beauty, "Los Caballos de Paso Fino", the horses with the fine walk,  served as the foundation stock for remount stations of the Conquistadors. Centuries of selective breeding by those who colonized the Caribbean and Latin America produced variations of the "Caballo de Criollo," among them the Paso Fino that flourished initially in Puerto Rico and Colombia, and later, in many other Latin American countries (primarily Cuba, the Dominican Republic, Aruba, and Venezuela).

Descendants of the Conquistadors' horses are believed to have spread into North America after the Spanish soldiers forayed for a brief time into this territory. The modern-day mustang has traces of his Spanish forbears. The Nez Perce Indian tribe, renowned for their expert horsemanship and sophisticated knowledge of breeding spotted horses, may have mixed some Spanish stock into their famous Appaloosas, whose name is derived from the Palouse River region of the Nez Perce's tribal homeland in Oregon.

Awareness of the Paso Fino as we know it today didn�t spread outside Latin America until after WWII, when American servicemen came into contact with the stunning Paso Fino horse while stationed in Puerto Rico. Americans began importing Paso Finos from Puerto Rico in the mid-1940s. Two decades later, many Paso Fino horses began to be imported from Colombia. For a while, there was some contention as to which country produced the "true" Paso Fino. Though there are still some self-professed "purists" who advocate for one or the other country, the American Paso Fino, true to our "melting pot" tradition, is often a blend of the best of Puerto Rican and Colombian bloodlines.

The Unique Gait of the Paso Fino

The Paso Fino is born with a gait unique to the breed, and its attitude seems to transmit to the observer that this horse knows its gait is a very special gift that must be executed with style and pride! The gait is smooth, rhythmic, purposeful, straight, balanced in flexion and synchronous front to rear, resulting in unequaled comfort and smoothness for the rider. The Paso Fino is a graceful, agile and supple equine athlete that uses all four legs with precision and harmony.

The gait of the Paso Fino horse is totally natural and normally exhibited from birth. It is an evenly-spaced four-beat lateral gait with each foot contacting the ground independently in a regular sequence at precise intervals creating a rapid, unbroken rhythm. Executed perfectly, the four hoof beats are absolutely even in both cadence and impact, resulting in unequaled smoothness and comfort for the rider.

The Paso Fino gait is performed at three forward speeds and with varying degrees of collection. In all speeds of the gait, the rider should appear virtually motionless in the saddle, and there should be no perceptible up and down motion of the horse's croup.

Classic Fino - Full collection, with very slow forward speed. The footfall is extremely rapid while the steps and extension are exceedingly short.

Paso Corto - Forward speed is moderate, with full to moderate collection. Steps are ground-covering but unhurried, executed with medium extension and stride.

Paso Largo - The fastest speed of the gait, executed with a longer extension and stride, and moderate to minimal collection. Forward speed varies with the individual horse, since each horse should attain its top speed in harmony with its own natural stride and cadence.

The Paso Fino is capable of executing other gaits that are natural to horses, including the relaxed walk and lope or canter, and is known for its versatility. In PFHA/USEF-sponsored shows, Paso Finos compete in Western classes (Trail and Versatility), as well as costume and Pleasure Driving. Paso Finos are also being seen in cow penning, trail riding and endurance competitions and are winning ribbons.

The ancient history of the Paso Fino is fast becoming the future of show and pleasure horses in the U.S. and beyond. They continue to grow in popularity, as one-by-one, converts are won over through experience.

Reprinted with permission from the Paso Fino Horse Association